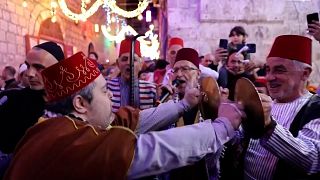 Muslims attend the lighting of giant lanterns in Jerusalem

Hundreds of Muslim worshippers gathered in Jerusalem's Old City on Monday evening to witness the lighting of a giant lantern as part of the cultural events marking the month of Ramadan.

Beating drums and chanting, worshippers made their way through the narrow streets of the Old City to a square where a large crowd waited for the giant lantern to be lit.

The crowd erupted in applause when the lantern was lit.

Ramadan is a month of dawn-to-dusk fasting, prayer and religious devotion for hundreds of millions of Muslims around the world.

In the Israeli-Palestinian conflict, Ramadan has often been a time of increased friction and confrontation.