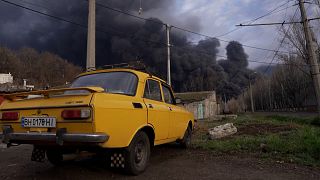 A cloud of smoke covered parts of Odesa on Sunday after at least two explosions were heard from the Black Sea city.

Several columns of smoke and fire were seen in different parts of the city as firefighters struggled to put out the blaze.

In a video statement released earlier today, a representative of the Southern Operational Command said Odesa had been targeted by a missile strike.

Odesa, Ukraine's largest port and home to the navy's headquarters was also targeted earlier this week.