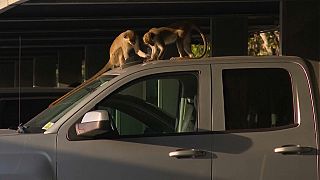 Near a South Florida airport, about 70 monkeys live in a mangrove forest and car park.

The United States has no native monkeys, but the smallish vervet monkeys have roamed Dania Beach since the late 1940s after a dozen brought from West Africa fled a now long-closed breeding facility and roadside zoo.

Today, 40 descendants are broken into four troops living within 1,500 acres (600 hectares) around the airport.

Florida also has a few colonies of escaped macaques and squirrel monkeys.

Travellers are often surprised to see the monkeys.

They squeal in delight and grab their cellphones, hoping for photos.

Vervets are grey and black with a greenish tinge, helping them blend into the trees.