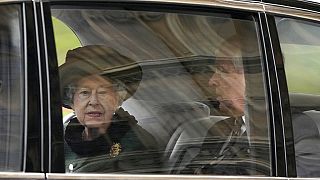 The ailing Queen Elizabeth II made her first major public appearance in months. She had not attended a high-profile public event since she spent a night in hospital last October.

The ailing Queen Elizabeth II made her first major public appearance in months. She had not attended a high-profile public event since she spent a night in hospital last October.

Ailing Queen Elizabeth II on Tuesday made her first major public appearance in months, at a thanksgiving service for her late husband, Prince Philip, who died last year aged 99.

The monarch, who turns 96 next month, has not attended a high-profile event outside her homes since she spent a night in hospital last October.

Ill health, including a bout of Covid, and difficulties walking and standing forced her to pull out of the Commonwealth Day service at the last minute on March 14.

Buckingham Palace only confirmed her attendance at Prince Philip's memorial service around two hours before it was due to start at Westminster Abbey in central London.

Unlike other members of her family and guests, she arrived by a side entrance and used a walking stick as she was helped to her seat by her second son, Prince Andrew, 62.

It was Andrew's first public appearance since settling a US civil claim for sexual assault, and after public outrage at his friendship with sex offender Jeffrey Epstein.

He took up a seat in the front row alongside his younger brother, Prince Edward. His elder brother Prince Charles, sister Princess Anne, and the queen sat opposite.

The Duke of Edinburgh, to whom the queen was married for 73 years, died on April 9 last year, just a few weeks short of his 100th birthday, after treatment for a heart condition.

Coronavirus restrictions at the time meant long-rehearsed plans for his funeral were hastily revised, and just 30 mourners attended, led by the solitary figure of the queen.

Photographs of her sitting alone at the funeral have become an enduring image of the pandemic.