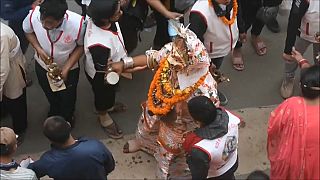 Performers masked as various Hindu deities dance to celebrate Naradevi Swetkali Parba, a festival organised every 12 years in Nepal's capital Kathmandu, in the belief it will help overcome evil and establish peace and security.

The festival honours Goddess Naradevi, whose name translates to the goddess of human beings.

During the festival, nineteen masked dancers representing various gods and goddesses take to the streets in colourful clothes and accessories as traditional music is played. The dancers illustrate various mythological stories of the deities.