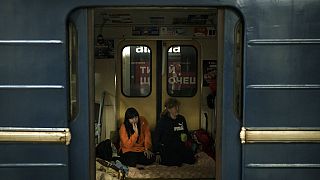 Thousands of residents continued to hunker down in the underground train stations of Ukraine's second most populous city on Saturday as Russia continued its aerial assault above.

Thousands of residents continued to hunker down in the underground train stations of Ukraine's second most populous city on Saturday as Russia continued its aerial assault above.

Many still remain in Kharkiv despite half of the city's population having fled since the conflict started on February 24.

She said those numbers had come down from about 2,000 in the early days of the invasion.

Families cram onto the station platform with the little possessions they'd taken with them while others take refuge in stationary train carriages, which are slightly warmer.

There has been heavy shelling in Kharkiv, which is located just 50 kilometres (31 miles) south of the Russian border, since the war began.