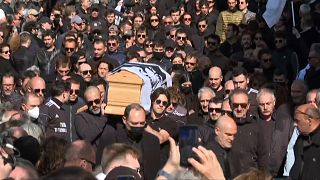 Several hundred people accompany the coffin of Yvan Colonna through the streets of Cargèse, Corsica, to the Latin church where his funeral is taking place.

The pro-independence activist, a local, was fatally attacked by a fellow inmate in Arles prison, where he was serving his sentence for the 1998 assassination of the prefect Claude Erignac.