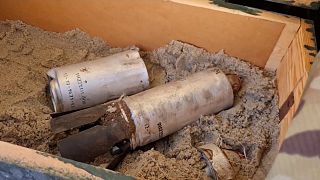 Officers urged residents to contact authorities to report any unknown or suspicious objects in areas affected by the Russian bombing.

Thursday will mark a month since Russia launched an attack on Ukraine that has forced millions to flee the country and killed at least 977 civilians, according to the latest report by the UN High Commissioner for Human Rights (OHCHR).