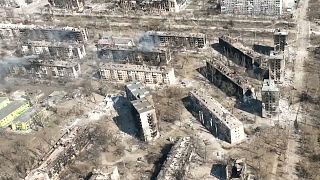 Drone footage has captured the widespread destruction in the besieged port city of Mariupol on Wednesday, March 23, after weeks of Russian shelling and bombardment.

Drone footage has captured the widespread destruction in the besieged port city of Mariupol on Wednesday, March 23, after weeks of Russian shelling and bombardment.

The footage shows plumes of smoke rising from flats in the Livoberezhna district of Mariupol on Wednesday, with many of the buildings showing burn marks.

The video has been geolocated to the the Livoberezhnyi District of Mariupol. It sweeps over Morskyi Boulevard.

On Wednesday, Ukrainian President Volodymyr Zelenskyy said in a video message on Facebook that around 100,000 people remain trapped in Mariupol, and are suffering inhumane conditions amid a blockade by Russian forces. Severe food, water and electricity shortages have been reported in the city.

Russia has been accused by Ukrainian officials of targeting evacuation buses attempting to evacuate Mariupol residents.