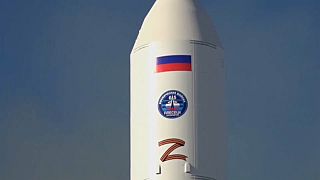 The Russian Defense Ministry released footage Wednesday that it says shows a Soyuz rocket taking off with a Meridian M communications satellite with the letter Z featuring prominently on the rocket, in support of the Russian military operation in Ukraine.

According to the ministry, the rocket took off at 15:57 local time (12:57 GMT) on Tuesday from the Plesetsk spaceport in Russia's far north, which is operated exclusively by the Defense Ministry.

The letter Z has become a symbol for Russians who support the government line and back the military operation in Ukraine.

It came to prominence after images of Russian military vehicles with a white Z on the side were shown being deployed on Ukrainian territory.

According to state news outlet RIA Novosti, the Meridian M satellite was put into orbit without incident and will be used to facilitate communication between marine vessels and aircraft.