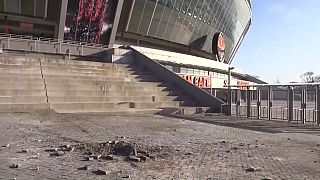 “The park named after Leninsky Komsomol, the territory of the Donbass Arena stadium, as well as the park area of ​​school No. 54 in Donetsk were under artillery fire,” the statement by the [self-proclaimed] Donetsk People's Republic Militia reads.

The RTR news report from Donetsk says: "Dozens of people were injured as a result of shelling by the Ukrainian Armed Forces and national battalions. Over the past 24 hours, 28 civilians were injured. The severity of injuries vary. Donetsk was under fire all night, and just a few hours ago, one of the districts of the city was shot at more than 20 times."

"The nationalists are targeting civilian objects: in particular, a landmark building, the Donbass Arena stadium, has been damaged. The shelling began at night, when there were just a few people on the street. Donetsk residents rarely come to the stadium now, as the Arena is closed, but it is still a symbol of the city."

It hosted matches in both the Champions League and at Euro 2012 but has been abandoned for eight years due to tensions between Ukraine and Russia.