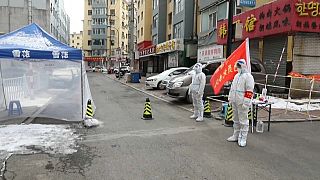 China locked down an industrial city of nine million people overnight and reported more than 4,000 virus cases on Tuesday, as the nation's "zero-COVID" strategy is confronted by an Omicron wave.

China locked down an industrial city of nine million people overnight and reported more than 4,000 virus cases on Tuesday, as the nation's "zero-COVID" strategy is confronted by an Omicron wave.

Health authorities reported 4,770 new infections across the country, the bulk in the northeastern province of Jilin, as the city of Shenyang in neighbouring Liaoning province was ordered to lockdown late Monday.

China has moved fast in recent weeks to snuff out virus clusters with a pick-and-mix of hyper-local lockdowns, mass testing and citywide closures. It reported two COVID-19 deaths on Saturday, the first in over a year.

Authorities have warned of the risk posed to growth by persistent lockdowns as the country strives to balance the health crisis with the needs of the world's second-biggest economy.

Health officials last week revealed only around half of Chinese aged over 80 have been double-vaccinated, as the spectre of Hong Kong's dire COVID mortality rates -- mainly among the unvaccinated elderly -- hangs over Beijing's decision making.