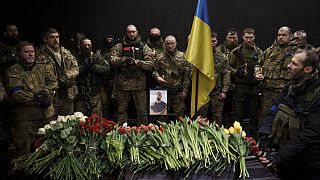 Khovtun died in combat in the town of Huta-Mezhyhirska, north of Kyiv.

More than three weeks into the Russian invasion of Ukraine, Western governments and analysts see the conflict shifting to a war of attrition, with bogged down Russian forces launching long-range missiles at cities and military bases, as Ukrainian forces carry out hit-and-run attacks and seek to sever their supply lines.

In Ukraine's major cities, hundreds of men, women and children have been killed in Russian bombardment.

Millions have moved to underground shelters or fled the country.