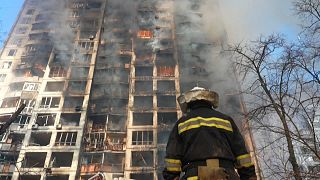 A series of Russian strikes hit a residential area of the Ukrainian capital on Tuesday, sparking a huge fire and frantic rescue operations in a 15-storey apartment building in Kyiv.

The strikes hit the Svyatoshynskyi district of western Kyiv, adjacent to the suburb of Irpin, which has been the scene of some of the worst battles of the war.

Two bodies were pulled from the rubble after a strike on a 16-storey building, the emergency service said in a Facebook post, adding that 27 people had been rescued from the site.

Flames erupted from the building as firefighters rescued people on ladders.

In Podilsk, smoke was still billowing from the blackened impact site in the middle of the building, and shards of glass were scattered around the blast site as residents threw charred debris out of windows.

Fighting has intensified in recent days around Kyiv, which is almost entirely surrounded by Russian forces that invaded Ukraine on 24 February.

More than half of Kyiv's three million residents have fled the city since the Russian offensive began.