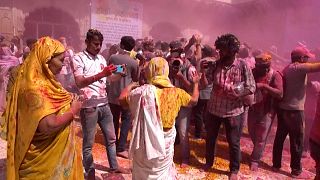 The colourful festivities marking India's Holi festival are underway, free of coronavirus fears for the first time in three years, including in a city usually associated with grief as the "city of widows".

At this spring festival, millions of people across the country throw coloured powder in a kaleidoscopic celebration of the end of winter and the triumph of good over evil.

The festivities peak on Friday, a public holiday when large street carnivals are held across the country, but the party started early in the northern city of Vrindavan, where elderly women smeared with saffron danced together all day.

Vrindavan is a holy pilgrimage town, traditionally associated with the Hindu deity Krishna.

But it is also home to some 2,000 widows who were ostracised by their families after the death of their husbands.