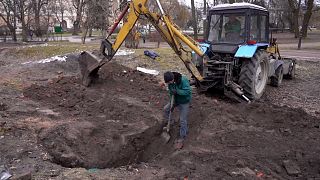 Volunteers in the Ukrainian city of Lviv have been setting up defences and shelters fearing Russian forces may advance sooner or later to the western part of the country.

Volunteers in the Ukrainian city of Lviv have been setting up defences and shelters fearing Russian forces may advance sooner or later to the western part of the country.

Thursday, at one of the city's parks, civilians spent the day digging to clean and expand an underground shelter that could fit about as many as 100 people.

Among them was 38-year-old Artem Mokrenets, an interior designer from Kyiv, who fled the capital to seek sanctuary in Lviv.

Mokrenets' life, like the rest of this country's, has been upended in a way no one could have imagined seven days ago.

Since then, the estimated 44 million population of Ukraine has split into three groups: those fleeing, those volunteering and those fighting or preparing to defend themselves.