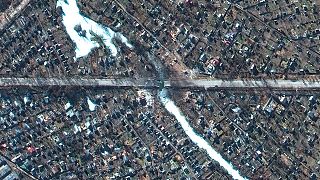 Earlier today, a blast was filmed from a car in the northern Ukrainian city of Chernihiv. The bombing took place in a residential area close to a school and a children's hospital.

This morning, another video showed an oil depot in the same city burning after being shelled by Russian forces early on the morning of Thursday 3 March 2022.