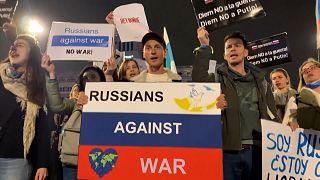 Thousands in Barcelona and Munich rally in support of Ukraine

Thousands of Spaniards rallied Tuesday in downtown Barcelona in support of the Ukrainian people, in the midst of the Russian invasion.

Among the protestors were dozens of Ukrainian nationals and anti-Putin Russians living in the Catalan region.

Several thousand people gather in the streets of Munich to rally for peace and solidarity with Ukraine. The police counted up to 45,000 participants at the Königsplatz in the centre of the city.