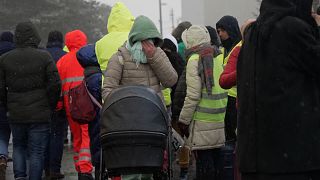 Trains kept arriving to the Polish city of Przemysl on Thursday, bringing hundreds of refugees fleeing Russia's invasion of Ukraine.

Trains kept arriving to the Polish city of Przemysl on Thursday, bringing hundreds of refugees fleeing Russia's invasion of Ukraine.

In a tearful goodbye at Przemysl train station, a Ukrainian woman had to leave her daughter behind because she had to go back to Ukraine and resume her job as a nurse in a military hospital there.

More than a million people have now fled Ukraine following Russia's invasion, in what was described as the swiftest refugee exodus this century by the UN refugee agency.

Volunteers in Romania continued efforts to assist those in need, often in private initiatives.

Under heavy snow, refugees, mostly women and children, continued to pour through the Siret border crossing after facing hour-long queues to exit Ukraine.

From all parts of Europe, civilians and humanitarian organizations came together to bring food, blankets and other basic items.

A Red Cross convoy of trucks made it's way into Ukraine.

Parts of the country, including the capital Kyiv, have been reportedly plagued with fuel and food shortages.