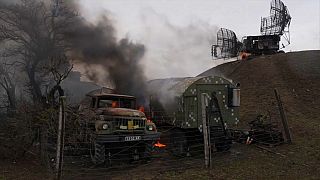 Radar arrays, vehicles and other equipment were seen burning on Thursday at a Ukrainian military facility outside the eastern city of Mariupol, after Russia launched a wide-ranging attack on Ukraine on Thursday, hitting cities and bases with airstrikes or shelling.