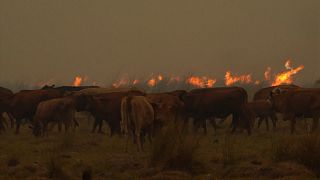 According to a report by the National Institute of Agricultural Technology (INTA) released Friday, the fire has burnt around 800,000 hectares (8,000 square kilometres) of land or nearly 10% of the region's area.

The blaze was threatening wildlife in the Iberá National Park, the largest wetland in the country and one of its largest ecosystems.

Many animals have been burned by flames or poisoned by smoke, while others have been run over on roads while trying to escape the fires.