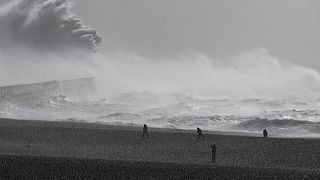 Millions hunkered down as Storm Eunice pummelled Britain with record-breaking winds on Friday, leaving the streets of London eerily empty and disrupting flights, trains and ferries across Western Europe.

Millions hunkered down as Storm Eunice pummelled Britain with record-breaking winds on Friday, leaving the streets of London eerily empty and disrupting flights, trains and ferries across Western Europe.

The UK capital was placed under its first ever "red" weather warning, meaning there is "danger to life". The same level of alert was in place across southern England and South Wales, where schools were closed and transport paralysed.

Eunice knocked out power to 80,000 homes and businesses in Ireland and more than 5,000 in Cornwall and Devon, southwest England, as towering waves breached sea walls along the coast.

One wind gust of 122 miles (196 kilometres) per hour was measured on the Isle of Wight off southern England, "provisionally the highest gust ever recorded in England", the Met Office said.

A large section of the roof on the Millennium Dome in southeast London was shredded by the high winds, while all trains in Wales, western England and Kent in southeast England were cancelled.