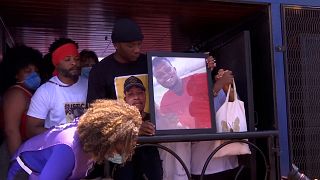 Protests over killing of Congolese refugee in Brazil

Demonstrators gathered in Rio de Janeiro, Sao Paulo and other Brazilian cities on Saturday to protest the killing of a 24-year-old Congolese refugee who was beaten to death.

His killing on January 24, sparked outrage and revulsion across the nation. Other protests have in recent years have already underscored hate violence in the country with a large Black population.

In Rio, demonstrators gathered outside the same beach kiosk where Moïse Mugenyi Kabagambe was killed, beaten by three men who were caught on security camera that police released to the public.

The video shows the assailants attacking the young man over the course of 13 minutes, holding him down and beating him with a rod, and continuing to do so even after he loses consciousness.

They are later seen attempting chest compressions, then rolling his body over.

Police are still investigating the circumstances that prompted Kabagambe's killing.

Kabagambe moved to Brazil in 2011 from his native Bunia, capital of Congo's northeastern Ituri province, in 2011.