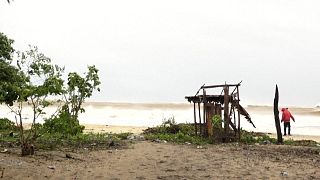 The town of Mananjary, on the east coast of Madagascar, was heavily affected by tropical cyclone Batsirai, which hit the island with gusts of up to 235 km/h.

The Meteo-France weather service had earlier predicted Batsirai would present "a very serious threat" to Madagascar, after passing Mauritius and drenching the French island of La Reunion with torrential rain for two days.

In the hours before the cyclone hit, residents hunkered down in the impoverished country, still recovering from the deadly Tropical Storm Ana late last month.

In the eastern coastal town of Vatomandry, more than 200 people were crammed in one room in a Chinese-owned concrete building.

Families slept on mats or mattresses. Many homes were destroyed and flooded, and residents are imploring the state to help them.