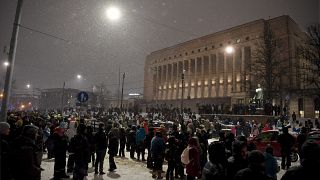 As many as 2,000 protesters were reported at the rally's peak on Friday. The group's demands included the immediate removal of all COVID-19-related restrictions, even though the government has announced its intent to remove them by mid-February. Organisers have told police that they plan to use civil disobedience tactics to press their claims.

Police began towing vehicles parked on Mannerheimintie (main street passing the Parliament house) when the protesters did not disperse when instructed to do so just after midnight. Police detained some 55 protesters outside parliament who had blocked traffic for several hours in pursuit of demands including cheaper petrol and the resignation of the government.

Protesters said they would gather again on Saturday at Citizen's Square, opposite the parliament building.