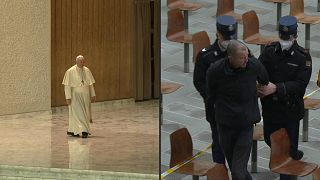 A shouting man denouncing the Church disrupted an audience by Pope Francis at the Vatican Wednesday, before being escorted outside by police.

"The Church is not the way God wants it," the man repeated in English, as he stood in the back of the audience hall holding his mask in his hand and gesticulating.

The man, who also spoke in Spanish and Italian, appeared distraught and concerned as he implored the pope: "Please."

While being led out of the hall by two Vatican police and a Swiss Guard without resisting, the man yelled, "God rejects you, Father. You're not a king".

The disturbance came near the end of Francis' weekly general audience with the faithful in the large Paul VI hall.