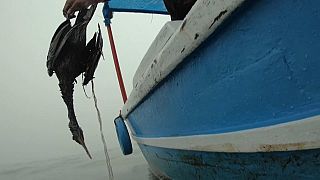 A surge of waves caused by the eruption of an underwater volcano near Toga, caused a Repsol tanker to drop and spill its cargo of 6,000 oil barrels while offloading at a refinery.

Peru has declared the spill an environmental emergency.

At Cavero Beach, one of the most contaminated areas of the spill, volunteers on Friday collected carcasses of dead animals and trapped others alive to remove the oil from their feathers and fur.

The National Forestry and Wildlife Service on Friday said they had recovered 51 birds of different species from Ancón, Ventanilla and Chancay beaches.

Among the rescued animals, six were Humboldt penguins, considered a vulnerable species protected by the Peruvian and Chilean laws.

Dozens of cranes, cormorants, and seagulls also fell victim to the disaster and are being treated by specialised technicians.

Lima Zoo, known as the Legends Park, is believed to be hosting several of the recovered animals in their enclosures, although there is limited space for them.