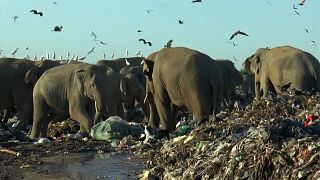 About 210 kilometres (130 miles) east of Sri Lanka's capital Colombo, 20 elephants have died in the past eight years after eating plastic waste, according to local vets.

In Pallakkadu village in Ampara district, the open dump is their last resort for food.

According to the authorities, there are 54 dumpsites in the country's wildlife areas, and about 300 elephants roam around them.

The Pallakkadu village waste management site was set up in 2008 with the help of the European Union.

Rubbish collected from nine neighbouring villages is dumped there but not recycled.

In 2014, the electric fence protecting the site was struck by lightning and the authorities never repaired it, allowing elephants to enter and roam the dump.