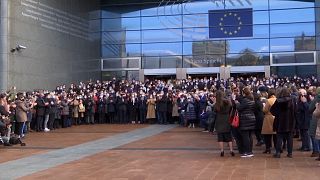 European Parliament ministers gathered for a moment of silence to honour EP President David Sassoli who died on Tuesday morning.

The emotional moment was packed with hugs and tears for Sassoli.

Sassoli, a socialist, had been hospitalized since Dec. 26 because of abnormal functioning of his immune system, spokesperson Roberto Cuillo said in a statement released the day before Sassoli's death.

Sassoli had been struggling for months with poor health after he suffered pneumonia caused by the legionella bacteria in September.

He was first elected to the European Parliament in 2009.

He won another term in 2014 and served as its vice president.