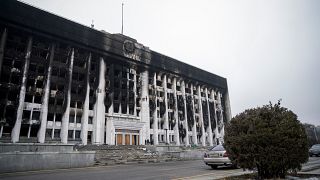 Life in Kazakhstan's main city and former capital seems to be returning to normal. Public transport has started operating for the first time since the violence, which left government buildings burned and gutted, and many businesses looted.

The authorities in Kazakhstan said that nearly 8,000 people were detained by police during protests that descended into violence last week and marked the worst unrest the former Soviet nation has faced since gaining independence 30 years ago.

President Kassym-Jomart Tokayev described the events as a "terrorist aggression" against the country and dismissed reports of the authorities fighting peaceful demonstrators as "disinformation."

The country's Health Ministry said that 164 people, including three children, were killed in the unrest.