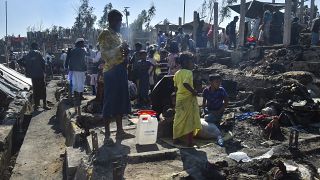 A huge fire blazed through a section of the crowded Rohingya refugee camps in southern Bangladesh.

According to Save the Children, more than 300 temporary shelters made from bamboo and tarpaulin were gutted overnight, rendering more than 1,500 refugees, including 750 children, homeless.

According to International Organization for Migration (IOM), no casualties were reported though two refugees were injured.

But those who once again lost what little they had were in dispair.

"If God helps me find someone who can help build a shelter again, I will live, otherwise I don't know what will happen", said 72-year-old Abu Sayed, sitting on the bare ground in the open.

In March 2021, a fire had destroyed more than 10,000 shelters, killing at least 15 refugees in the Balukhali Rohingya refugee camp, according to Save The Children.