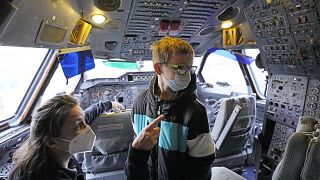 After getting their jab, children and parents were given a tour of the plane's cockpit and a chance to take photographs.

Until 2014, the Airbus A300 Zero G was used to simulate weightlessness as a so-called parabolic aircraft and was used for test and experimental flights.

Parents said getting vaccinated on the plane was an exiting alternative to a doctor's office.

Germany's independent vaccination advisory panel is recommending vaccination for children age 5 to 11 with pre-existing conditions or who are in close contact with vulnerable people.

Children in this age group should receive two doses of the Pfizer-BioNTech vaccine three to six weeks apart, the panel said.