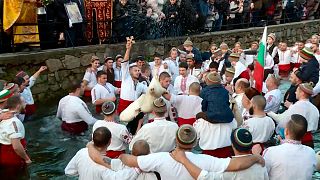 On the 6th of January every year, the Bulgarian Orthodox church marks St. Jordan’s Day (Epiphany). It falls on the twelfth day after Christmas and marks the day Jesus was baptized in the Jordan River by John the Baptist. In Bulgaria, the holiday has a special place in the cultural tradition since over 133,000 people in the country celebrate their name day.

The main ritual on this day is performed early in the morning by a priest who throws a wooden cross into the river, sea, or lake. Men dive in the ice-cold water and race to retrieve the cross. It is believed that the man who first takes the cross out of the water will be blessed to be healthy and freed from evil spirits throughout the year. The priest delivers a special blessing to that man and his household.

More than 200 men and one woman from Kalofer followed the tradition. The celebration began early in the morning when local participants gathered at the house of Kalofer’s mayor Rumen Stoyanov. Dozens of men set foot in the waters of Tundzha River for the traditional ritual of saving the cross, and the famous male dance of the Epiphany. Led by a bagpiper and a drummer, men in traditional folk costumes went to the river early in the morning. After the cross was caught, it was handed over to the youngest participant in the dance.

According to locals, the tradition is more than 200 years old and is done only in Kalofer. The town has also applied for UNESCO, but according to the organization, it does not meet the criteria for intangible cultural heritage.