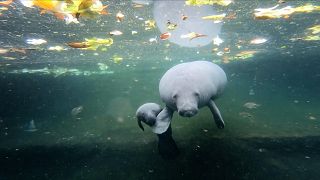 A Dutch zoo on Thursday welcomed a West Indian manatee calf, one of only 39 in all of Europe.

A Dutch zoo on Thursday welcomed a West Indian manatee calf, one of only 39 in all of Europe.

The calf was born at the Royal Burgers' Zoo in Arhem and is currently living with its mother and father at the zoo's mangrove.

Only nine other European zoos are home to manatees - large marine mammals which are sometimes referred to as sea cows.

Keeping manatees is expensive as two adults go through 60 to 70 kilos of vegetables a day, mainly endive, but also pak choi, celery, Chinese cabbage and alfalfa, along with spinach, broccoli, chicory, lettuce, Swiss chard and kale.

Manatees as increasingly being labelled as a protected species in several countries and the International Union for Conservation of Nature (IUCN) Red List classifies the animals as "vulnerable."