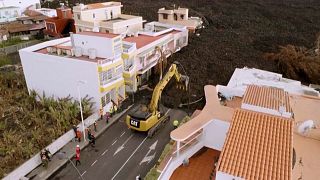 On Saturday officials finally announced the eruption, that destroyed hundreds of homes and large swathes of farmland had ended.

The announcement follows 10 days of low-level activity from the Cumbre Vieja volcano on the tiny isle, part of the Canary Islands which lie off Africa's northwest coast.

No injuries or deaths have been directly linked to the eruption, which began on September 19, spewing rivers of molten rock and sending ash plume containing toxic gases into the air.

But it destroyed 1,345 homes, mainly on the western side of La Palma, as well as schools, churches, health centres and farm irrigation infrastructure.

The slow-moving lava has covered 1,250 hectares of land as it made its way to the Atlantic, much of it banana plantations, La Palma's main livelihood along with tourism.

The eruption -- which was accompanied by frequent earthquakes -- is the first in La Palma since 1971 and the longest on record on the island of around 83,000 people.

About 7,000 people have been evacuated from their homes, with many given just minutes to pack their belongings.

The damage from the eruption could exceed 900 million euros, according to regional officials.

The lava from the volcano created two new peninsulas when it cascaded into the ocean, one 44 hectares in size and the other about five hectares.

La Palma is roughly 35 kilometres long and 20 kilometres wide at its broadest point.