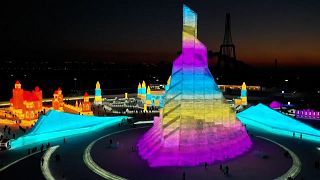 The Harbin Ice and Snow World is one of the world's leading theme parks featuring large-scale ice and snow sculptures.

More than 60 clusters of landscapes, including over 100 works have been built in the park. Meanwhile, nearly 10,000 workers used 230,000 cubic meters of ice and snow to build the theme park.

"The Harbin Ice and Snow World has been committed to the inheritance, development and innovation of the ice and snow culture. This year's event themed on 'the Light of the Winter Olympics, shining the world', aims to help the Beijing Winer Olympics to achieve the goal of engaging 300 million people in winter sports," said Liu Rentao, deputy general manager of the Harbin Ice and Snow World.

Harbin Ice-snow World was established in 1999, with various activities held in the park each winter for several months.