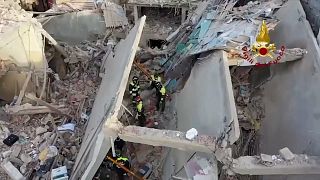 Firefighters in Sicily were digging through the rubble of a collapsed apartment building on Sunday in the search for six missing people after an explosion apparently caused by a gas leak killed at least three, authorities said.

The building was occupied by nine members of an extended family, and two visiting relatives — a heavily pregnant woman and her husband — were also on the premises when the explosion occurred late Saturday in the town of Ravanusa, firefighters said.

Two women were rescued overnight. The explosion also collapsed three other buildings that appear to have been unoccupied, and shattered windows in three more.