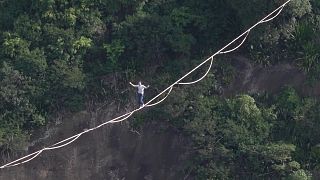 It was the first time he had attempted the feat in Rio de Janeiro, and crowds gathered to watch and cheer him on.

Paulin remarked on how attractive the view was as he completed the walk with the world famous Sugar Loaf mountain as his backdrop.

The stunt was part of a project called "Les Traceurs" (a French term for parkour practitioners), where Paulin crosses long distances next to famous global landmarks in order to draw awareness to environmental issues.

The project has been to many parts of the world, including a 670m (0.4 miles) crossing between the Eiffel Tower and Trocadero Square.

Slacklining is similar to tight rope walking but uses a different material and the tension on the line is less.