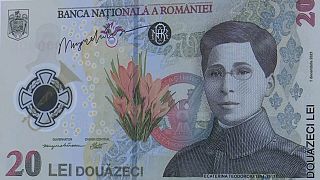 It is the first legal tender banknote which features a female personality: Ecaterina Teodoroiu. This responds to the legitimate public interest, which has been largely supported by the society, and helps strengthen gender equality and the major role of female personalities in Romanian history and society.

Ecaterina Teodoroiu was the first female-officer in Romanian Army. She fought and died in WW 1st, in Marasesti battle (Vrancea county). In Romanian historiography, Ecaterina Teodoroiu is placed in the context of gendered experience of the Great War on the Eastern Front, on the same pedestal as Queen Maria of Romania.

Teodoroiu had initially worked as a nurse but she subsequently decided to become a front-line soldier, being deeply impressed by the patriotism of the wounded and by the death of her brother Nicolae (Sergeant in the Romanian Army).