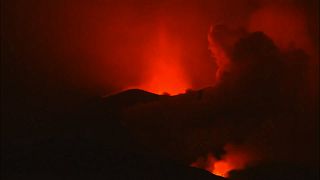 La Palma's Cumbre Vieja volcano continued erupting into the early hours of Wednesday morning. One of the volcano's seven lava flows dropped into the sea Monday, the third flow to reach the Atlantic ocean.

Air quality has worsened on the island after a new overflow of the volcano cone. European Union scientists calculate that the molten rock has covered more than 1,000 hectares (2,471 acres) and damaged more than 2,700 buildings.

According to the local government, 314 hectares (775 acres) of crops have been affected, of which more than half are banana trees.

The volcano on La Palma, on the Canary Islands off northwest Africa, first erupted more than nine weeks ago. The prompt evacuations of more than 7,000 people helped avoid casualties.