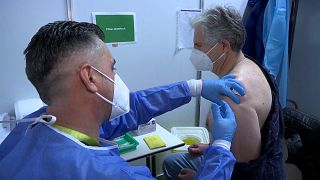 Austria's largest vaccine centre has seen a surge in vaccinations since the announcement of another lockdown and a nationwide vaccine mandate.

The daily numbers of vaccinations has grown from 1,000 a day two weeks ago to around 12,000 a day this week.

While the number of first vaccinations has risen by 10-15%, the majority of people waiting in line at Vienna's Austria Center are there to get their booster shot.

Political analysts say the Austrian government did not effectively communicate the importance of vaccines early enough, and that many Austrians did not take the vaccination campaign seriously after former Chancellor Sebastian Kurz declared the pandemic "over'' last summer.

Kurz was forced out in a corruption scandal last month and was replaced by his foreign minister, Alexander Schallenberg, who expanded the controversial lockdown on Austria's unvaccinated people to a lockdown for everyone within a week.

Schallenberg has also pledged to make vaccinations mandatory by Feb. 1, with details still to be hammered out.