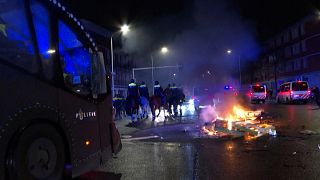 Police in the Hague detain rioters and clear the streets after protesters set bicycles and wooden pallets on fire, as a demonstration against the Dutch government's coronavirus restrictions turned violent for a second night in the Netherlands.

On the previous night, at least two people were injured after police fired shots at protesters and 51 were arrested in Rotterdam.