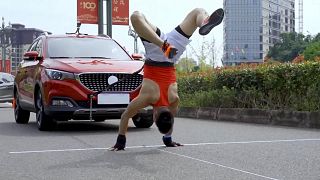 The British gymnast was speaking after setting the new record-breaking distance at 6 meters.

"Find whatever you are really good at, see what the record is, train as hard as you can and do it. Honestly, you won't regret it," he added.

Watson is just one of a collection of new world record holders from around the globe that will be featuring in the latest edition of the Guiness Book of Records.

The record-breaking attempts from new hopefuls all took place ahead of the eighteenth annual GWR Day.

"It's a chance for anyone who wants to tick off getting their name in the famous Guinness World Records Books. It's a chance for them to have a go and maybe succeed and become officially amazing."

The first for the most double 'around the world' ball control tricks in one minute (24), and the second for the most sit-down football crossovers in 30 seconds (female) (62).

The professional freestyle footballer said she hoped to inspire "new generations" with her achievements.

"The most important thing is to inspire girls to follow their dreams and to know that if you set yourself a goal, you can definitely achieve it if you put hard work into it," said Biondo.