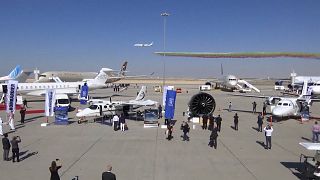 Dubai Air Show opens to industry on mend amid virus

Dubai's biennial Air Show opened Sunday, showcasing an aviation industry hard-hit by the coronavirus, but on the mend.

Boeing and Airbus have traditionally been the stars of the aviation trade show, competing for multibillion-dollar Gulf-based airline purchases and hammering out final details minutes before back-to-back press conferences.

This year, however, the five-day exhibition is expected to be quieter due to the subdued state of flying and travel amid the COVID-19 pandemic.

The show's first day drew eyes toward defense and military hardware from countries like Russia and Israel.

The star on the tarmac outside the exhibition hall was Russia’s Checkmate fighter jet, which was shown to the press in a custom-built hangar with a display of laser lights bouncing off a mirrored ceiling.

The jet, with a baseline $35 million price tag, is a less costly competitor to the U.S. F-35, which the UAE has been trying to acquire since formally recognizing Israel last year in a deal brokered by the Trump administration. That sale has slowed under U.S. President Joe Biden.

The day's blockbuster commercial deal by Airbus was a sale of 255 new aircraft to Indigo Partners' various low cost carriers.

The package includes a mix of A321neo and A321XLR aircraft.

At Airbus' pre-pandemic list prices, the order would clock in at well above $30 billion. The company declined to provide any details on the sale price.

The air show is taking place near Dubai's Al Maktoum Airport, a second and smaller international hub to Dubai's main airport, which is the world's busiest for international travel.

With vaccine rollouts ongoing in many nations worldwide, the airline industry as a whole is recovering from last year's roughly $138 billion net loss.

The International Air Transport Association forecasts a net loss of $11.6 billion for airlines in 2022, and nearly $52 billion in losses this year.

Although commercial travel remains uncertain amid the pandemic, cargo volumes are already above pre-pandemic levels. Some airlines have ripped out seats on their grounded passenger flights and transformed their aircraft into cargo planes.

On the back of that growing demand, Boeing announced plans to add three conversion lines — one in the U.K. and two in Canada — to covert commercial aircraft to freight carriers.

Boeing also signed an order with Icelease for 11 of its 737 freighters.