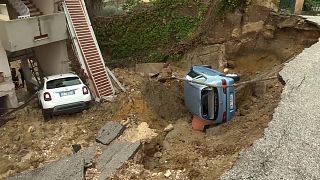 Heavy rains in Sicily into Thursday opened up a sinkhole which swallowed up cars and threatened a residential block.

No casualties were reported after the section of road collapsed next to the apartments in the town of Sciacca.

Firefighters worked through the night in the Italian region, including rescuing people trapped in their homes by flood water in Mazara del Vallo.

The fire service said it carried out more than 100 operations between the cities of Agrigento and Trapani on the west of the island.