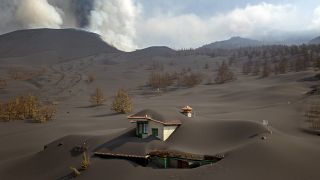 Six weeks after a volcano erupted on the Spanish island of La Palma, vast amounts of ash and lava continued to cover buildings and farmland.

Spain's military emergency unit (UME) and ground army were working in the exclusion area, removing ash from the roofs of buildings.

According to emergency officials, some lava flows reached a height of 40 meters (over 130 feet) as strong magma overflows from the previous days didn't advance much.

Flows of molten rock from the Cumbre Vieja volcano itself have caused the evacuations of about 7,500 people and destroyed more than 2,500 buildings, mostly homes.

The rivers of lava cover over 970 hectares of mostly farmland.

Other than in an area on the island's western side, life continues as normal for La Palma's 85,000 residents except for having to clean up volcanic ashes.