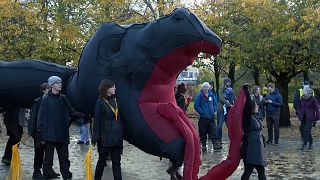 Fridays for Future climate march in Rome and Glasgow

Climate campaign group 'Fridays for Future' staged a march in Rome Saturday as world leaders met in the city for the Group of 20 summit.

Italy is deploying 5,300 extra troops and police officers, curbing public transport and sealing off a whole neighbourhood of Rome to keep the peace during this weekend’s event.

Protests and demonstrations were planned throughout the weekend.

COVID-19 economic recovery and climate change are the two main issues being discussed by the leaders of the world’s 20 biggest economies, who are gathering in Rome before heading to Glasgow, Scotland, for the UN climate conference.