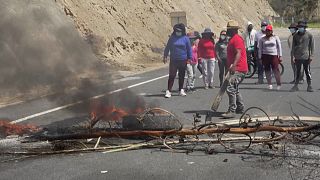 Main roads in at least ten provinces of Ecuador remained blocked on Wednesday on the second day of a national strike against fuel price hikes and President Guillermo Lasso's economic policies.

In some cases, police officers tried to clear the roads, but demonstrators kept returning to the barricades that they had set up.

During a military ceremony, Lasso called for dialogue and "to think about the country's benefit and not about personal, partisan or trade union interests."

The demonstrations have been called by trade unionists, Indigenous people, farmers and other social sectors outraged by the increase in fuel prices.

Regular gasoline has gone up more than 70% over the course of little more than a year.