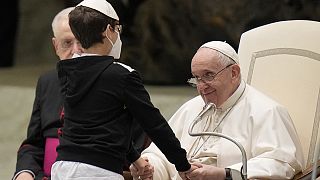 A 10-year-old boy interrupted Pope Francis' weekly audience Wednesday after he took the stage to ask for the pontiff's white skullcap.

As priests delivered prayers and introductory speeches, the boy stood up from the front seats in the Vatican City auditorium, climbed onto the stage and pointed to the pope's skullcap.

He then took the hand of one of the priests and asked again for the pope's cap.

The audience applauded wildly as the boy left the stage after receiving his own skullcap.

After the incident, Francis praised the "spontaneity and freedom" of children.

He noted that the child appeared to have an intellectual disability, then prayed for him.