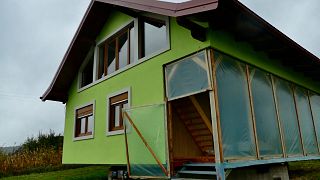 It is not exactly on a par with the Taj Mahal but not far off: a family house in Srbac, a small town in northern Bosnia, is in its way a monument to love.

The house designed and built by 72-year-old Vojin Kusic, with its green façade and red metal roof, can fully rotate on its foundation.

Kusic's motive was simple: to satisfy his wife's shifting desires as to what she should see when she looks out of the windows of her home.

Many years ago, when they had just married, Kusic built another, typical house for himself and his wife in which they raised their three children.

But his wife questioned the room layout shortly after it was built.

Six years ago, the only one of Kusic's three children not to have left the nest, made the family house his permanent residence.

Kusic didn't go to university and dedicated his life to his manufacturing business -- skills which were quite useful to design and build a rotating house by himself.

As for parts, he cleverly reused electric motors and wheels of an old military transport vehicle.

When visitors come to see their unusual home, Kusic's wife no longer asks him to send them away but rather stays away herself.